Zeno Robinson
Cristopher is a main character of Cris Tales and one of Crisbell's teammates.

Cristopher is a teenage boy with dark blue eyes and messy brown hair. He wears a pair of large googles with green lens, one of which is cracked. He has several piercings, two black studs on both ears and two gold earrings on one ear.

His outfit consists of a dark blue cape over a white sleeveless shirt and two gold necklaces. He also wears a black sash around his waist with pale green cloth hanging on the side, and dark blue pants. Gold-colored armor covers his forearms and lower legs.

Cristopher was born and raised in the kingdom of St. Clarity to Armando and Sophia. At some point in his life, his parents would separate, with his mother entering a relationship with Mayor Enzo.

Prior to meeting Crisbell and Matias, Cristopher was chasing the Goblins that were recently attacking Narim.

Cristopher fights with a shield that can split into two to act as claw-like gauntlets with in combat.

He has some magical abilities, as some at the beginning of the game of being able to summon water and fire. 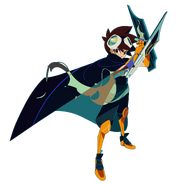 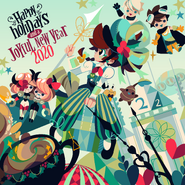 Cristopher as a doll

Cristopher in the announcement trailer

Cristopher in the Gamescon 2020 Trailer