Daman Mills
JKR-721 also known as K is a future playable character of Cris Tales and one of the Crisbell's teammates.

K is a mechanical android of average height. His face is human-looking with a fair complexion, and his eyes are a mix of grey and gold, but can gold glow when he's charge up. He has spiky light grey hair and grey eyebrows. He also has pierced ears.

K's body is made out of dark gray and gold exoskeleton, which he covers partially with clothing. He wears a gray sleeveless hooded jacket, revealing his forearms. He also wears light grey pants cut at the bottom with what appears to be fur or fabric, and white boots with a grey side going down the side. In the center of his forehead is a piece of black armor with four gold spikes jutting out on each side.

When in combat, an armored mask forms over his face.

K possesses several abilities such as enhanced speed, producing an electrical charge, and even a jet pack hidden under his coat.

He is a physical fighter, and is able to deliver punches at quick speed.

K's appearance in the Gamescon 2020 Trailer 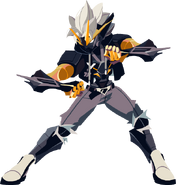 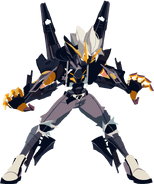 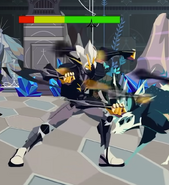 JKR-721's weapon of choice is his gauntlet made with materials from Rena's age.Designed by Rena scientist & embbed with ancient crystals Jkr doesn't operate with mana but rather his action focusing on fast movement,continuous physical damage,and electrical spell accumulate heat overtime,if jkr overheats he explodes and will deal damage to himself and others nearby.(explode damage influenced by his m.atk)Visit Wild Cat Armory for time synthesis upgrade services.

JKR is an incredibly skilled warrior in hand to hand combat.His speed and strength are unrivaled.With his powered fist,he can deliever multiple attacks in quick sucession.

Due to the high strain put on JKR's body,he constantly builds up heat in his body.This can be fatal if too much is stored.He can release the heat through valves in his armor,but leaves him defendless.

You might not want to get closer.More dangerous opponents than you have fled rather than face me at melee range.

'I can't really hit you from all the way over there,can I?'

Speed and precision.Two highly notable characteristics of JKR.Taking advantage of this,JKR enters a massive speed boost,which allows him to confuse his adversaries,making them believe that there are actually three of them.

JKR is a mystery to everyone.Since he doesn't resemble any known piece of technology.He clearly operates on thermal and magical energy,but also has some normal human bodily functions.

JKR eyes maybe look human,but they are far from it.They serve his targeting capabilities,and also can perform great feats of analysis on his enemies.

Larger and more complicated lightning spells have to be channeled through the caster himself,mixing with his own life energy.As such,thunder magic can become weaker in older mages.

Due to his great reflexes,JKR is able to prepare himself for anything.Cristopher hasn't been able to hit him even once during their training sessions.